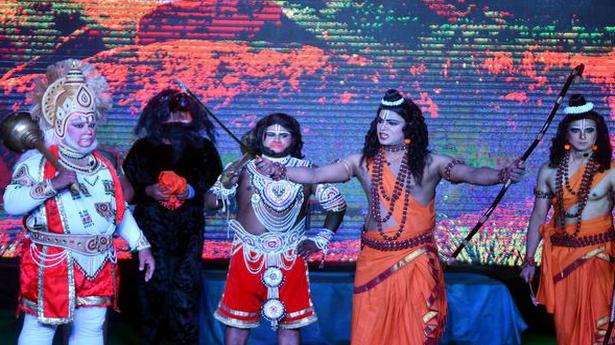 After Ramlilas, Dussehra celebrations have contracted into local affairs due to the ongoing COVID-19 pandemic. While the biggest among such events has been cancelled due to caps on gatherings limiting attendance to 200, according to organisers, local functions featuring small effigies scheduled to be ‘burnt symbolically’ with the aid of lights or audio visual effects are being planned over the weekend.

Restrictions on religious gatherings, up to a maximum of 200 attendees, related to the festive season were lifted till October 31 by the Delhi Disaster Management Authority (DDMA) in view of the pandemic. The directive, however, prescribed strict restrictions on activities ranging from setting up food stalls to standing or squatting when attending such events.

“Due to the restrictions on the number of attendees being allowed by the administration as well as the problem of air pollution, only small ceremonies with many improvisations are being organised this year,” said Ashok Goel Devraha, general secretary of the Delhi Dharmik Sangh which is an umbrella body that facilitates the organisers of Ramlilas. Over 700 Ramlilas are organised across the city every year, of which around a hundred are among the oldest and the most popular.

Ashok Agarwal of Luv Kush Ramlila Committee, one of the oldest Ramlila organisers in the city, said it had decided to cancel Dussehra celebrations and the Raavan dahan this year would be a televised repeat of last year’s festivities. “There is no other option; we would rather improvise like this and maintain our connection with crores of patrons across the world online than risk our lives,” he said.

Rajesh Gehlot, chief patron of Dwarka Sri Ram Leela Society, a traditional crowd-puller in Sector 10 where Prime Minister Narendra Modi was in attendance last year, said the pandemic had, like everything else, affected the preparation of effigies as usual. “The number of people allowed to gather, that is 200, is actually the number of people we employ to prepare the three effigies to be burnt. We have decided to cancel this year,” he said.

Among the smaller events, will be a narration-based staging of the traditional 10-day Ramlila crunched into four days leading up to the Raavan dahan aided by lighting in south Delhi, and another being planned as a three-hour gala in east Delhi.

Anil Sharma of the R.K. Puram Ramlila Religious Committee said the event would unfold between October 22 and October 25.

“There are many episodes of the Ramayana which, because of time constraint, will not be staged but narrated so that we can conclude on Dussehra. There will be no traditional burning of the effigies; we will use lights and sound effects to stage a symbolic effigy burning of Raavan, Kumbhkaran and Meghnad,” Mr. Sharma said.

Satish Aggarwal of East Delhi’s Shri Balaji Ramlila Committee said they would stage the epic, followed by a dahan within three hours on Sunday. “We are in the process of getting the requisite permissions and will not be burning the effigies; we will use lights and other effects for the purpose,” he said.