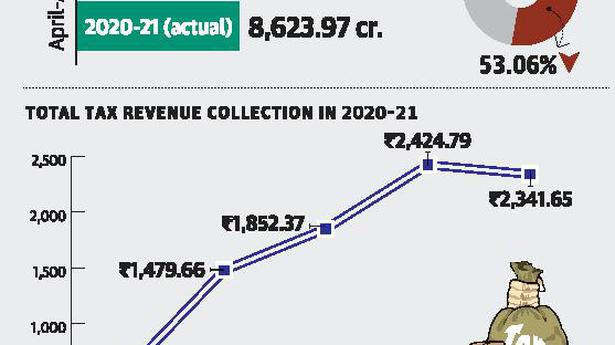 Govt. considering roping in third party to study how to boost tax collection

The tax revenue collection of the Delhi government was lesser in August compared to July, after steadily increasing in May, June, and July. However, the sum is lesser than last year’s collection, according to the State government’s monthly tax collection figures.

The revenue collection of the Delhi government for April to August is down by 53% (₹9,751 crore) compared to the estimated collection, as per the annual budget 2020-21.

Last week, Finance Minister Manish Sisodia had told The Hindu in an interview that the State government will continue with the schemes for free water, electricity and free bus ride for women, which costs hundreds of crores, despite the economy being in a “very bad” state.

The government is considering to rope in a third party to study how to boost tax revenue collection, especially GST, said officials. But a decision is yet to be taken.

Due to the fall in tax revenue, the government has reduced its expenditure to ₹11,376.44 crore during April-July, compared to ₹14,411.94 crore during the same period last year. It is a reduction of 21%.

“Lesser tax collection could be because there was no demand in April and May and there was pent-up demand in June and July, which would have decreased in August. You did not buy in April, May and there would have been an uptick in July,” said Arun Kumar, economist and Malcolm S. Adiseshiah, Chair Professor at the Institute of Social Sciences.

When asked about the fall in GST collection in August, Mr. Kumar said: “It is difficult to comment on it without knowing which month’s collection it actually corresponds to.” He said that the government had given an extension for payment of GST of February and March till June due to the pandemic and this could have reflected in June and even July’s figures.

“With consumer confidence still low and unemployment high, I do not see a recovery in September. But it is difficult to make predictions and everything depends on the pandemic,” Mr. Kumar said. “During the festive season in October, there will be some increase, but it will be muted compared to last year or the year before,” he added.