Hyderabad: In a statement that can trigger controversy, Telangana Bharatiya Janata Party president Bandi Sanjay Kumar on Monday said that if anyone raises a finger at the party supporters and Hindus in the old city of Hyderabad, “we will cut their hand”.

Kumar made the statement while addressing party cadres at Secunderabad’s Alwal in Hyderabad.

The Telangana BJP president vowed to protect those BJP supporters and Hindus, who are facing problems in “the old city of Hyderabad”.

Bangalore Mirror has cited Kumar as saying: “Hindus in Old City are in fear. They are worried if they will be alive or not. I visited the whole of Old City recently. I gave the Hindus the assurance that I am with them. I asked them to boldly fight. If one hand rises on a Hindu in the old city, what shall we do in the new city? We will chop off one hand here.”

Amidst huge applause from the cadre, the Telangana BJP chief vowed to “capture the Old City”.

“Only saffron flag will fly atop Bhagya Lakshmi temple (at Charminar) in Bhagya Nagar. No pink (Telangana Rashtra Samithi) or green (All India Majlis-e-Ittehadul Muslimeen) or any other colour.”

Kumar further said that Hindus are described as communal while Christians and Muslims are called secular. He further hit out at the media for not giving prominence to the news related to the BJP, alleging that the “whole media is sold out to the TRS party”.

The media is “pushing our news into inside pages and are highlighting other parties,” said Kumar, adding: “We are devising a strategy to tackle such biased media.” 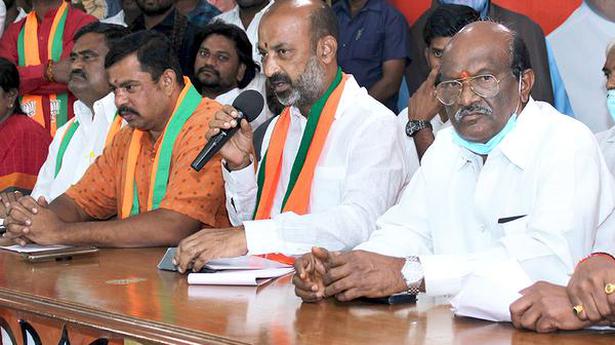 BJP for protection of endowment land