Bestselling Indian author Ravi Subramanian released his new series ‘Shortz’ in a digital event on September 7, 2020. ‘Shortz’, as the title suggests, is a series of 20 fast-paced gripping novellas. The first two books in the series titled ‘Insomnia’ and ‘A Brutal Hand’ are crime thrillers co-authored by Ravi Subramanian, who was an author-mentor for Write India season 1, and debut author Jignesh Asher (Jigs), a top 10 Write India winner for both Jeffrey Archer and Shobhaa De’s contest. And so, the books were aptly released by the authors along with Vinita Dawra Nangia, Director- Write India and Times Literature Festivals, in a live digital event on publisher Westland Books’ Facebook page. Congratulating the authors on their new books, Vinita said, “Ravi was an author-mentor in Write India season 1, and Jigs is a Write India winner. In these books he is mentoring you, a Write India winner, again to write… (Ravi) you gave Jigs the umbrella of your protection and allowed him to write under it”.

Write India, a Times of India initiative, is a short story writing competition wherein each month a celebrity author gives a prompt; participants have to develop a short story using it and following the rules. Appreciating the initiative for discovering new talents in the country, Ravi said at the book launch, “Write India has thrown up new writers like no one else… and it has successfully run for three seasons!”

The unveiling of ‘Insomnia’ and ‘A Brutal Hand’ was followed by a candid discussion about ‘Shortz’, writing and all things books between Vinita, Ravi and Jigs. Revealing more about the books and the new series, Ravi said, “’Shortz’ is a thriller on steroids. These are short 150-170 pages fast-paced thrillers– a book equivalent to caffeine to an exhausted mind… It is an initiative to publish good new talent wherein I’ll work closely with new authors to bring out more stories in the series. Apart from Jigs, there are other Write India winners too who are a part of the line-up for ‘Shortz’.”

Starting the conversation, Ravi pointed out that Jigs was probably the first author in the recent past to debut with two novels. “It’s like hitting two centuries in the first two test matches that you play,” he said. He then asked Jigs about his journey from being a banker to a writer, to which the latter humbly replied, “It is said ‘You don’t choose writing, writing chooses you’ and that’s what happened to me. I think everybody has a book in them and probably that book came out from me as well… Sometime in mid-2017 I enrolled in a creative writing course and then I saw a Write India advertisement with Jeffrey Archer’s picture. I participated and I was one of the top 10 winners! That’s when Vinita propelled me to write. Soon after that you read my winning story; you were planning ‘Shortz’ at that time with Westland. So, things just fell into place. I think I was lucky– it was a calling that I finally found”.

He then asked Vinita on the satisfaction of seeing Write India winners getting published, to which she said, “I feel good about the fact that Write India has been nothing short of a revolution for aspiring writers. When I launched it in 2015 with Times Internet Limited, I had very little idea about the ripples that it was going to create. At that time my idea was to create a platform for all the people who wanted to write but they had no access to publishers. On the other hand there were people like you Ravi, who had become success stories in the world of literature. People like Chetan Bhagat, Amish Tripathi, Durjoy Datta, Preeti Shenoy, Ravinder Singh, Nikita Singh– you guys were bringing out book after book and making it seem like writing was so easy. Who wouldn’t want to get the success that you guys tasted? The imagination and ambition of an entire generation was fired by this– everyone had stories to tell and now they had dreams to follow. With Write India we just gave them that opportunity. It was an idea at the right time, at the right place, with the right people and today we have close to 400 Write India winners in 3 seasons. We have worked with 31 of the country’s and some of the world’s best authors. We are getting ready to start season 4 and Jigs has definitely made us proud.”

Steering the conversation towards ‘Shortz’, Vinita then pointed out that starting a new book series with the crime thriller genre was interesting “because in India, the genre hasn’t really taken off till now.” Agreeing with her observation, Ravi explained, “It is intriguing to see that crime thrillers don’t sell as much in India compared to other genres, say romance or mythology. Maybe because reading a thriller requires you to be very involved with the book… Also a lot of publishers are not publishing crime thrillers as they should. Unless you have more talent coming up, crime thrillers are not going to take off.”

Meanwhile, it is noted that Ravi has dabbled in writing not just crime thrillers but also banking thrillers, romance and even children’s books. Explaining this he said, “As a writer one should not box themselves into any particular genre”. He further revealed that after ‘Shortz’, his next books are a children’s detective series which is expected to release next month; while his next big novel is a banking thriller which will be out in 2021. His co-author Jigs is also working on a full-length crime thriller novel at the moment. 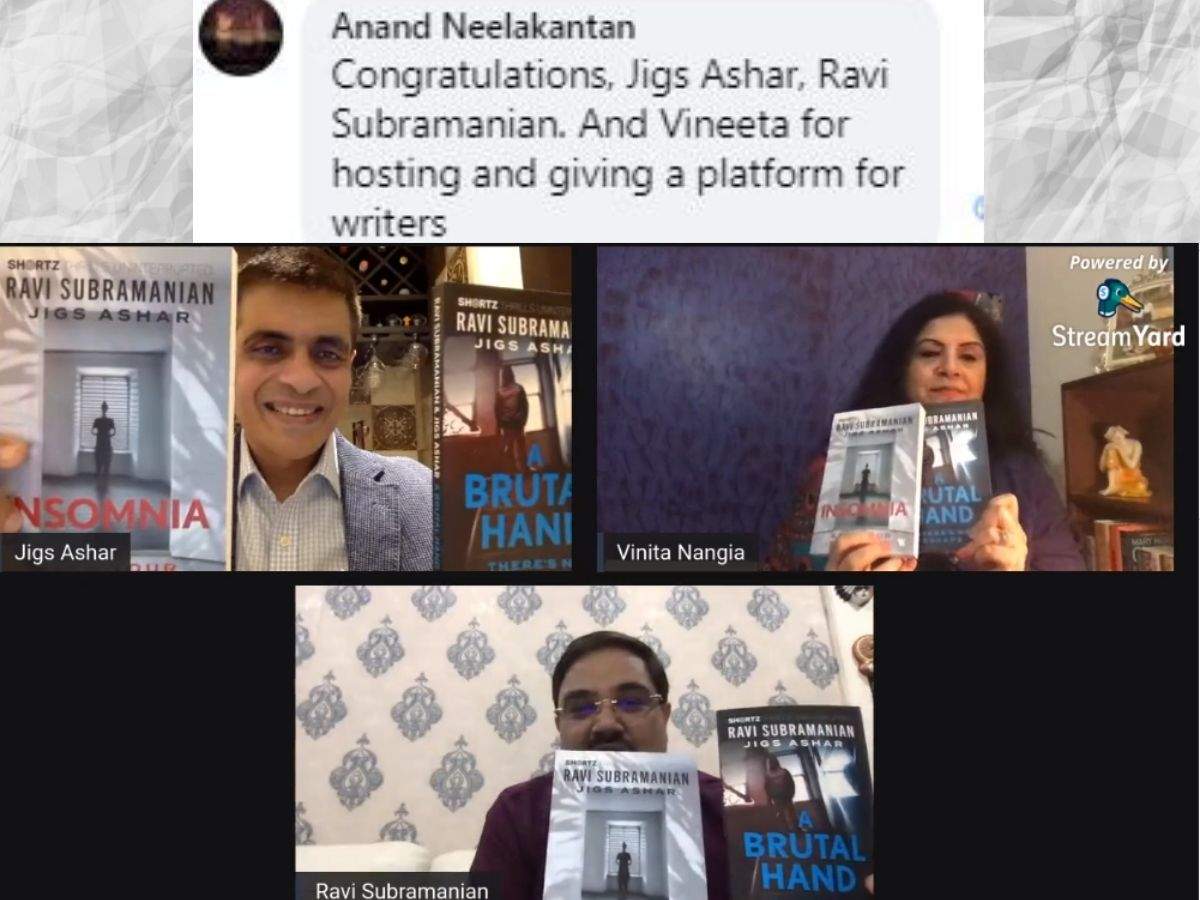 The engaging and insightful event was viewed live by many avid readers and Write India winners. Anand Neelakantan, who was an author-mentor for Write India season 2, also took time off to congratulate the authors and Vinita as he commented, “Congratulations Jigs Asher, Ravi Subramanian, and Vinita Dawra Nangia for hosting and giving a platform for writers”.

On a parting note, Ravi urged viewers and readers to read ‘Insomnia’ and ‘A Brutal Hand’, the first two books from ‘Shortz’. “Read it for the cause of thriller writing in the country” he said.