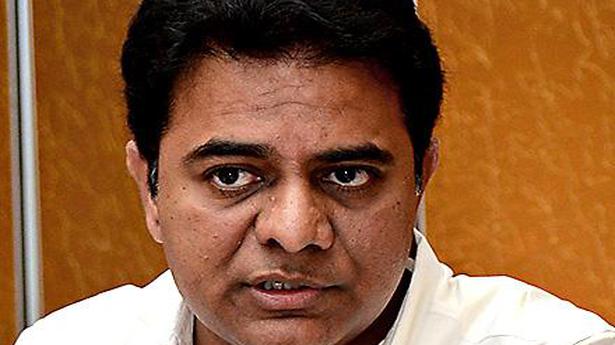 Telangana Industries and IT Minister K.T.Rama Rao on Friday said that with a rich data and innovation ecosystem, the State was acting as a testbed for scalable emerging technologies solutions.

“If we solve for Telangana, we solve for the world and we welcome the world to come and partner with us. Let’s solve it together,” he told the US India Week organised by the US-India Strategic Partnership Forum (USISPF).

Mr.Rao, who was in conversation with Sanjay Gupta, Vice President and Country Head of Google India, said Hyderabad has claimed its rightful place on the global innovation map and has captured the imagination of global leadership.

The State government had formulated actionable strategies for developing robust local ecosystems for AI, Blockchain, drones, IoT, and cyber security. “We are recognized as undisputed thought leaders in these areas among Indian State governments,” he added.

A release from his office said the Minister highlighted how Telangana had clearly defined its vision to be a global leader in emerging technologies, including AI, and has made rapid strides towards achieving the vision. Capitalising on the value of emerging technologies has the potential to impact productivity and efficiency at all stages of the agricultural value chain as well.

On Telangana government’s measures in transforming the State and Hyderabad into an innovation hub and a favourite destination for global companies, Mr.Rao said several policies and initiatives of the State government are a role model to become self-reliant in various sectors. With its TS-iPASS Telangana is the only State that allows for self-certification-based system for approvals and clearances.

UK returnees being identified – The Hindu