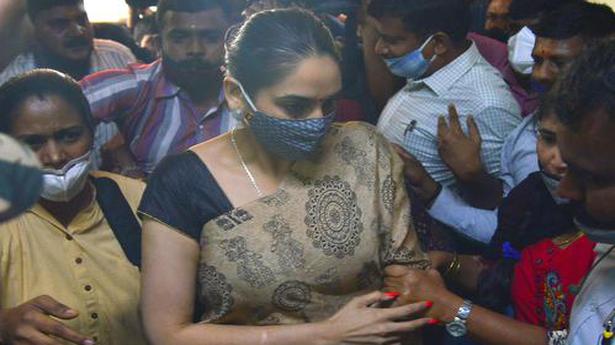 She has been booked under various Sections of the NDPS Act; two others held for organising parties and dealing in drugs

After several hours of interrogation, the Central Crime Branch (CCB) on Friday arrested actor Ragini Dwivedi for her alleged involvement in a drug racket with links to the Kannada film industry. She has been charged under various Sections of the Narcotic Drugs and Psychotropic Substances Act.

Around 6.30 a.m., two police teams searched her flat in Yelahanka for three hours. They seized her phone, car keys and other material evidence.

The search was based on information gathered from Ravi Shankar, a second division assistant with the Jayanagar RTO, who was arrested on September 3 in connection with the case.

The CCB believes she destroyed evidence pertaining to the drug case and tried to hide her association with Ravi.

According to a CCB official, “Soon after the first notice was issued to Ragini to appear for questioning, she bought a new mobile phone and transferred all data, except WhatsApp messages. This was to destroy evidence comprising messages and other details.”

According to the police, she had deleted details from her phone, including a WhatsApp phone call and conversation, which could have established her link with Ravi Shankar.

“We are trying to retrieve the deleted data,” said a senior police officer.

The actor’s name cropped up during the course of the investigation into the involvement of actors and singers in the Kannada film industry in a recent drug bust, which involved party drugs like ecstasy and LSD. The police had issued a notice to the actress to report for questioning on September 3, which she did not comply with.

“We obtained vital information and sought court permission to carry out the raid,” the officer added.

The raid came a day after the police arrested Ravi Shankar, who is reportedly a close associate of Ragini.

The police also arrested two men who allegedly organised high-profile parties. One of the accused, Rahul Shetty, has been charged with organising parties in and around the city, and using them to sell party drugs.

“He is an architect and realtor who travelled to neighbouring countries to organise such parties. He has links with international drug dealers from whom he procured drugs to sell to his clients here,” said Bengaluru Police Commissioner Kamal Pant.

“Rahul is a close associate of another film star, identified as Sanjjanaa Galrani who is also under the scanner,” said a CCB official.

Later in the evening, the CCB arrested Viren Khanna, a party organiser.