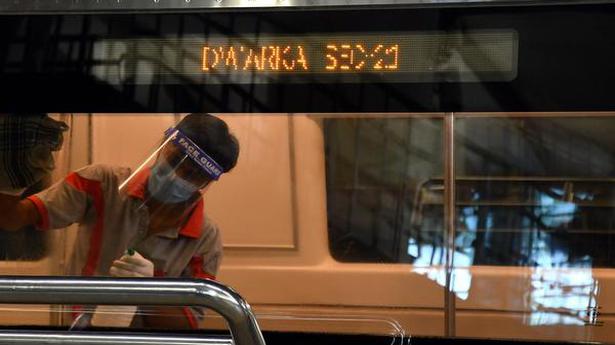 Occupying only alternate seats, mandatorily using smart cards instead of tokens, getting restricted access to enter and exit stations — these are just some of the changes that commuters have to adapt to once Delhi Metro opens its doors.

Services on the Delhi Metro is set to resume after over five months from September 7 in a graded manner with staggered timings. As a crowd control measure, each station across the network will have only one or a maximum of two entry and exit gates functional. On Monday, the Yellow Line (Samaypur Badli to Huda City Centre) and the Rapid Metro Gurugram will be made operational with the metro running between 7 a.m. to 11 a.m. and from 4 p.m. to 8 p.m.

At each of the entry gates, thermal scanners and sanitisers have been put in place.

“Passengers having temperature or signs of COVID-19 will not be allowed to travel. They will be directed to report to the nearest medical centre,” said metro officials.

Once inside the station, a commuter will have to follow the signs and marks, drawn across platforms to indicate social distancing measures.

Only two or three persons will be allowed inside a lift. For the escalators, people will have to stand on alternate steps for social distancing. In a bid to prevent chances of transmission of the virus, all commuters will be required to use smart cards instead of tokens. Metro officials said the facility to generate tokens at the Token Vending Machines have been disabled.

They also said commuters will be able to use the “Autope” system, which will help recharge smart cards automatically at the AFC (Automatic Fare Collection) gates, from September 7.

Another feature — pre-recorded audio and visual announcements inside the metro coaches will reinforce the need to wear masks at all times and maintain social distancing – will also be added. Several messages to raise awareness on COVID-19 and the necessary protocols have also been added inside the coaches.

The dwell (stoppage) time of trains at stations will increase from 10-15 seconds to 20-25 seconds once the operations resume. At interchange stations, the stoppage time will be increased from 35-40 seconds to 55-60 seconds.

“This will be done to ensure commuters have enough time to board and alight,” officials added.

To ensure compliance of the new guidelines and travel protocol, a team of 800 officials and staff will also be deployed across stations. Monitoring through CCTV will also be done for crowd management inside the stations.

The officials said in case of non-compliance of guidelines, fines will be imposed on commuters under the relevant law. Several stations like Kashmere Gate, New Delhi, Rajiv Chowk, Central Secretariat, IGI Airport and Yamuna Bank will have a new feature — foot-operated landing call switch in lifts — said officials.

The Delhi Metro Rail Corporation (DMRC) has advised commuters to take extra time of 10-15 minutes for their daily commute. While parking facilities at metro stations will be operational, feeder bus services will remain suspended until further notice, the DMRC said.

For stations in Haryana

On the other hand, holding a meeting with the DMRC officials on the resumption of the service, Gurugram Deputy Commissioner Amit Khatri on Thursday said a supervisory official would be appointed for coordination with the local metro officials for smooth running of the trains.

Besides, a Nodal official will also be appointed for overall supervision.

Five of the metro stations on DMRC’s Yellow Line fall within the jurisdiction of Gurugram. Mr. Khatri asked the DMRC officials to chalk out a plan to avoid the gathering of passengers.

Haryana Auto Chalak Sangathan State president Mahavir Singh, also present in the meeting, said there would be separate auto stands to pick up and drop the passengers.