The actor who is presently at her home town in Himachal Pradesh has been levelling allegations of an active drug cartel in Bollywood and has even linked it with the death of actor Sushant Singh Rajput, which is presently being probed by the CBI

Actor Kangana Ranaut landed in controversy on Thursday after she compared Mumbai to Pakistan-occupied Kashmir (PoK) in a bid to counter Shiv Sena’s Rajya Sabha MP Sanjay Raut who had slammed her for saying she was scared of the Mumbai Police.

The actor who is presently at her home town in Himachal Pradesh has been levelling allegations of an active drug cartel in Bollywood. She has even linked it with the death of actor Sushant Singh Rajput, which is presently being probed by the Central Bureau of Investigation, as an abetment to suicide case.

Replying to Bharatiya Janata Party MLA Ram Kadam, who claimed that the Maharashtra government and the Mumbai Police were not providing her protection after her expose on Bollywood-drug mafia nexus, Ms. Ranaut had tweeted, “Thank you for your concern sir, I am actually more scared of Mumbai police now than movie mafia goons, in Mumbai I would need security either from HP government or directly from the Centre, No Mumbai police please.”

Mr. Raut reacted sharply to her tweet and said, “We kindly request her not to come to Mumbai. This is nothing but insult to Mumbai police. The Home Ministry should take action over it.”

Ms. Ranaut on Thursday tweeted, “Sanjay Raut Shiv Sena leader has given me an open threat and asked me not to come back to Mumbai, after Aazadi graffitis in Mumbai streets and now open threats, why Mumbai is feeling like Pakistan occupied Kashmir?”

The Congress said it condemned the comparison of Mumbai to PoK. “Mumbai is a city which gives shelter and food to crores of Indians. Comparing it to PoK is an ungrateful act. We condemn such statements,” Congress spokesperson Sachin Sawant said, adding that Mr. Kadam who has been comparing Ms. Ranaut to ‘Jhansi ki Rani’ is insulting the queen of Jhansi. 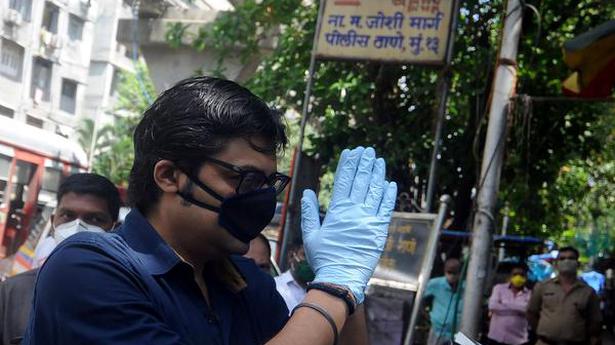