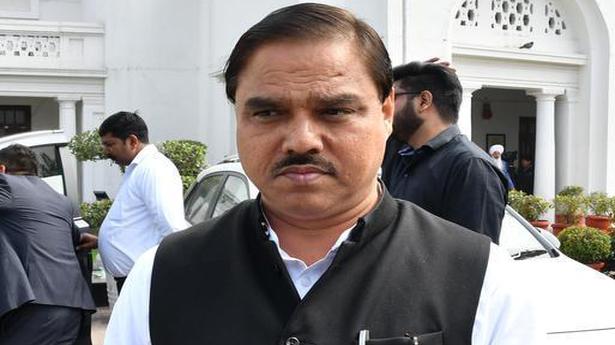 Ex-Delhi Law Minister Jitender Singh Tomar on Friday told the Delhi High Court that a fake degree case lodged against him cannot be heard by the special court set up to deal with matters of elected MPs and MLAs as his election to the Legislative Assembly in 2015 polls has been set aside. Mr. Tomar said as his election has been held as null and void by the High Court on January 17, it would be the ordinary court which would have jurisdiction to try the case, that is, the court having jurisdiction of Hauz Khas police station.

Where was the need to arrest Jitender Tomar?

The submissions were made before Justice Anup Jairam Bhambhani who was hearing a reference received from District and Sessions Judge-cum-Special Judge PC Act Sujata Kohli relating to the transfer of the criminal complaint.

The High Court listed the matter for further hearing on November 2.

The High Court in its January 17 verdict had held as “void” Aam Aadmi Party (AAP) leader Mr. Tomar’s election to the Legislative Assembly in 2015 polls for furnishing false information of his educational qualification in the nomination papers.

During the hearing, advocate Kush Sharma, representing Mr. Tomar, submitted that the case could not have been placed before the special court at all as his election was set aside and he was not an MLA at all.

He said even though an appeal has been filed by him before the Supreme Court against the High Court’s order under the Representation of People Act, notice has been issued but no stay was granted.

Initially, Mr. Tomar has approached the magisterial court seeking transfer of the case which was allowed. However, when the matter was placed before the district judge, it said the power to entertain and decide the transfer application from one district to another lies only with the High Court.

The High Court had delivered its January verdict on a plea by BJP leader Nand Kishore Garg who had alleged that Mr. Tomar’s 2015 election from Tri Nagar Assembly constituency had been “materially affected by deliberate concealment, misrepresentation, wrong declaration and wilful suppression of the educational qualification in the affidavit filed along with the nomination form”.

Mr. Garg had contested against Mr. Tomar in the 2015 Legislative Assembly polls.

In its judgment, the High Court had held that Mr. Tomar had “published statements of fact which were false and which he did not believe to be true in relation to his educational qualifications and to unduly influence the voters/electors in his election and which act of the respondent no.1 (Mr. Tomar) amounts to a corrupt practice.”

It had also said Mr. Garg was successful in proving that Mr. Tomar’s claim of being a graduate in two years B.Sc programme of Avadh University was also fabricated.

It had said that false declaration by the AAP leader about his educational qualification that he had obtained a valid LL.B degree, and vocation has resulted in “inducement and thwarted free exercise of electoral right of the voter”. Beneficiaries turn up without prior registration