Until a year ago, this place was a professional bawarchi’s (cook’s) kitchen. You would see tubs full of onion rings. On some evenings, the street outside would be lined with degs (vessels) containing shorbas and biryanis.

And today the same place is crammed with…. well, let’s start with the old rotary dial landline telephone. The black beauty is lying atop a dusty radio, which is from the days when radios used to be as hefty as CRT TVs. A narrow ledge on the wall is supporting a loud speaker, a broken clock, a cassette player (whatever that is!) and even an exhaust fan, one of those tiny ones that are installed in the kitchen.

“This is my antique shop,” says shopkeeper Atik Rehman. The dimly lit establishment in Old Delhi’s Galli Chooriwallan looks like a cave, and most of it is piled up with a mound of indecipherable objects—some of which might be considered antique.

Mr Rehman, a resident of nearby Matia Mahal Bazar, has been in the business of old things for about two decades, but he took up this shop space on rent only some months ago.

This morning he is on his own in the shop, sitting behind his desk, by the telephone and the radio. His left arm is plopped up beside what looks like one of those cute-looking speakers of old desktop computers, that were in vogue at the turn of the century. Now, this thing might not be antique but it sure is something you no longer see.

A shop of collectibles with nostalgia stuff from recent past

The pull of this place is in its bizarreness. You might be repelled by the gloomy darkness of the place and exit it immediately—or, you might happily spend an entire day here, sorting through objects, some of which you will find totally useless and some with possibilities of archival beauty.

Mr Rehman doesn’t go about the city to collect these items. “Kabadiwallas who gather rejects from across the city come to me, and I pick up the things I want from their pheris (carts).”

One of the charms of this place is that it has a great amount of utilities that were in everyday use just two or three decades ago, and have now completely disappeared. Their sight starkly jolts you—how quickly we have moved on, leaving behind the memories of stuff that until recently were an integral part of our living. (For instance, there’s even an iPod in the litter, one of the early ones, that looked like a slim long box you could hang around your neck.)

If you came of age in the 90s, come here to find the souvenirs of your teenage years. If you are a millennial, step in to see how life was in the time of your fuddy-duddy cousins.

The shop opens daily from 8am to 8pm. The telephone is for ₹5,000, and the radio is for twice that amount. 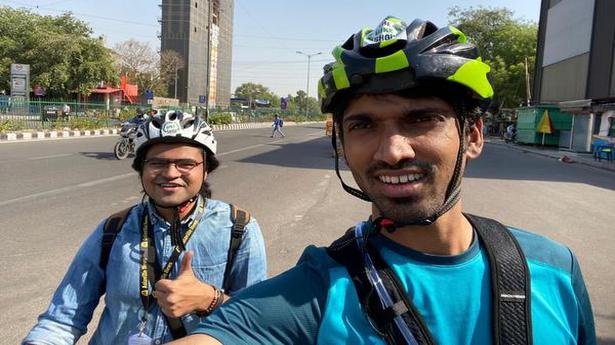