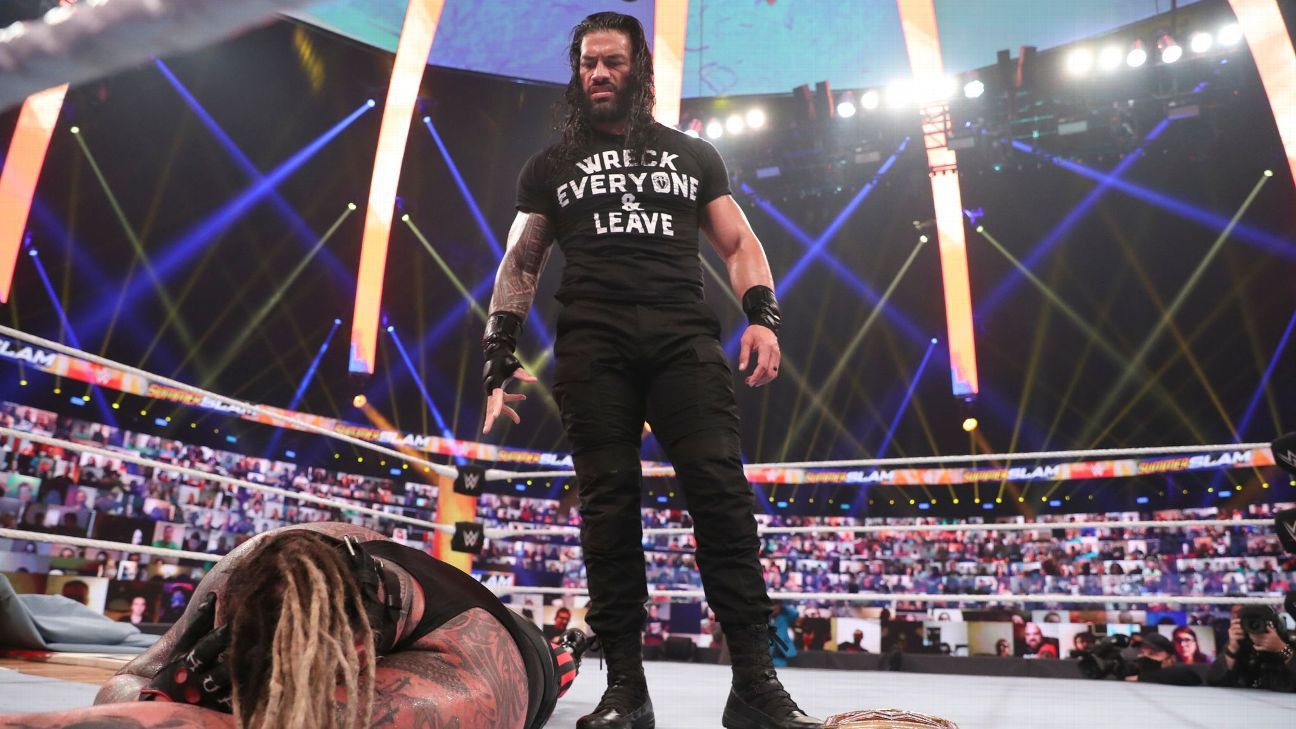 What do you do when you have six days, two shows and five hours of TV to build up an entire pay-per-view card Sunday for WWE Payback?

Lean heavily on the events of SummerSlam or try to cram a month’s worth of drama into Raw and SmackDown?

While we’ll all have to wait and see what’s to come on Friday night’s SmackDown, Raw was a disorienting experience for a number of reasons — not the least of which being the two matches most clearly suited for an event entitled Payback were either derailed or given away early on TV.

At SummerSlam, Drew McIntyre successfully defended his WWE championship against Randy Orton in a match in which neither man hit his signature finishing maneuver. When McIntyre offered up a rematch to Orton to open Monday Night Raw, Payback was the obvious answer on the table. Instead, Orton punt-kicked McIntyre in the head three times, and Keith Lee, making his Raw debut, stepped up for his friend leading to a match on Sunday.

And after months of attacks from Seth Rollins and his disciples, both physical and psychological, Dominik Mysterio pushed Rollins to the limit in his debut WWE match. With Dominik’s father, Rey, returning to in-ring action, the Mysterios vs. Rollins and Murphy was a no-brainer for Payback, but instead, the match took place on Raw, and the shadowy group known as Retribution attacked the Mysterios. The rematch was ultimately added to the Payback card on Friday afternoon.

By the end of Monday’s show, Raw had lined up three matches for the PPV: Lee vs. Orton, Apollo Crews defending the United States championship against Bobby Lashley, and the makeshift team of Shayna Baszler and Nia Jax challenging Bayley and Sasha Banks for the women’s tag team titles. In addition to the Mysterios vs. Rollins & Murphy tag match, King Corbin vs. Matt Riddle was the sixth match added to the card, after their conflict continued with a Riddle-Shorty G match on Friday

The events of SummerSlam have led directly to only one match thus far, but it’s the headliner on the marquee — the returning Roman Reigns challenging for the Universal championship in a triple-threat match, against Braun Strowman and newly crowned champion “The Fiend” Bray Wyatt.

That match was made all the more interesting in the closing moments of SmackDown, when Paul Heyman was revealed as Reigns’ new representative.

Now that he’s back, what’s next for Roman Reigns?

After months of running through every persona Bray Wyatt has to offer, except for Husky Harris and the version of Wyatt who is directly possessed by Sister Abigail (thankfully), “The Fiend” stepping up and reclaiming the Universal championship was no real shock at SummerSlam.

Reigns charging back into the picture, quite literally, was rather shocking. Full credit to WWE on its SummerSlam tagline — I did not see that coming.

So what does that mean for the Universal championship, and SmackDown in general? To have Reigns make such an emphatic and dramatic return only to lose seven days later doesn’t seem to make much sense. There’s always the possibility of setting up a longer-term conflict with Wyatt by utilizing the triple-threat format and having Strowman take the fall, but it would take some creativity to pull it off.

In reality, Reigns is very likely to walk out of Payback as the new Universal champion — something he seemed poised to do back in April before his match against Goldberg fell apart the week of WrestleMania.

If Reigns is to blow past the two men who have been battling for that belt, he’ll need an antagonist of his own. That could certainly be Wyatt, but the long-term prospects don’t necessarily project to help either guy in an extended conflict. Wyatt needs to step away from the pursuit of the title for a bit and figure out a new story to tell. As good as Wyatt has been, a psychological battle that starts with “Funhouse” Bray and ultimately ends with “The Fiend” can be told only so many ways.

Reigns can’t stumble into the same pitfalls that hampered him in the past, and it seems as though everything’s heading in a much different direction after the events of Friday night. Having Heyman in Reigns’ corner changes everything; rather than shoehorning Reigns into the stereotypical good guy persona that he’s held onto for so long, we have no idea which direction he’ll head in after Payback. Will he ultimately be someone with good intentions, for whom the ends justify the means because it will be his first world title win in two years? Or perhaps he will be even rougher around the edges and take on the the more devious elements of previous Heyman clients like Brock Lesnar.

As a group, Retribution already showed an interest in injecting chaos into the Universal title picture when they descended on Wyatt and Strowman during the opening moments inside the WWE Thunderdome on SmackDown. The group is in desperate need of a step forward, whether it be a promo explaining its actions, a slow reveal of who’s behind the masks or one dramatic unmasking event that sets the stage for what Retribution will be in the long term.

But after being absent on SmackDown, and the return of Reigns with Heyman already adding another wrinkle, it seems unlikely the two stories will intersect again soon. Instead, they could once again take aim at Rey and Dominik Mysterio, and offer some clarity into the group’s intentions and goals.

Perhaps a collective known as “Retribution” getting the upper hand at an event called “Payback” is a bit on the nose. But a big moment could quell some of the negativity surrounding the relatively unfocused and directionless story around Retribution and give everyone something else to be excited about.

It’s time to bask in the glory of Keith Lee

For now, let’s brush aside the disaster that was Keith Lee’s (we hope) temporary music track, and new ring gear that made him look more like a guy who takes his adult rec basketball league a little too seriously than the charismatic force of destruction he truly is. When Orton blindsided McIntyre over and over again on Monday night, Lee was thrust directly into the spotlight opposite the 13-time world champion. During their brief encounter, prior to McIntyre triggering a DQ, Lee looked to be an equal and held his own, even showing off his strength and backing down Orton at a few points.

The match on Sunday will be another test. A full match against Orton will tell us a lot about where Lee’s trajectory is heading and how his early days on Raw will go. The door has never been more wide open for a new star to plant their flag and show what they’re capable of.

If Lee shows off 50 percent of what made his time in NXT so special on Sunday, he has the potential to open a lot of eyes and set himself up for even bigger things to come. And if the music hasn’t changed by Sunday, plug your ears, wait for the bell and enjoy.

Shayna Baszler and Nia Jax have been at each other’s throats in recent weeks on Raw, with Jax going so far as to blindside Baszler’s compatriots Marina Shafir and Jessamyn Duke on Raw Underground. So naturally they’d come together to battle Sasha Banks and Bayley for the women’s tag team titles with zero previous matches together as a team.

As much fun as Bayley and Banks have been, going among Raw, SmackDown and NXT, there hasn’t been enough of a focus on forming long-term partnerships to stand opposite the tag team champions as a compelling threat.

With the exception of The IIconics and the Kabuki Warriors, the latter of which is no more due to Kairi Sane’s departure from the company, there haven’t been teams that have made the tag titles their singular focus. Alexa Bliss and Nikki Cross each pursued the SmackDown women’s championship on her own despite being a team, and Tegan Nox and Shotzi Blackheart paired up only long enough to have one shot at the belts.

Monday through Friday, host Pablo Torre brings you an inside look at the most interesting stories at ESPN, as told by the top reporters and insiders on the planet. Listen

Partnerships like the reunited Ruby Riott and Liv Morgan and the as-yet surface-level relationship between Natalya and Lana are great to see. But until there are four, five or even six teams built with the express purpose of being tag champions, the women’s tag team division isn’t going to have much appeal or staying power beyond Banks and Bayley’s current reign.

You know what would be nice? Having a women’s team debut together on Raw or SmackDown instead of following the same weird courtship script where two dissimilar people slowly find common ground and form a tentative bond that strengthens with time. It’s happened exactly twice since Banks, Charlotte Flair and Becky Lynch debuted together: the IIconics and The Riott Squad.

This match came together because Bayley and Banks were antagonizing both Jax and Baszler, after Jax attacked Baszler and caused a DQ in her match against Bayley on Monday night. Jax and Baszler stopped fighting each other and turned their focus toward the women’s tag team champions, and their belts. There’s a slow, simmering dissension brewing between Bayley and Banks, stemming from Bayley not stepping up to help Banks the way Banks helped Bayley at SummerSlam, but it seems likely that after some minor peril at Payback, Banks and Bayley will smooth things over enough for the time being to get the job done and retain.

In the ideal scenario, Baszler and Jax simply can’t keep it together and end up fighting one another. There’s always a chance the unlikely partners could come together and win the titles on Sunday, but it doesn’t do much in the long term for any of the four women involved to end a very strong title reign on a fluke to a team that’s pairing up for the first time.

It was always going to end this way, wasn’t it? Crews has battled his way through MVP and Shelton Benjamin long enough, and it’s time for him to stare down Lashley, the final boss. Even though The Hurt Business has had good days and bad days, Lashley has been virtually untouchable. Even after losses, Lashley gets his licks in on either the unfortunate winner or someone who happens to cross his path on Raw Underground.

How Crews fares against Lashley will say a lot about what his ceiling is on Raw. A win and a successful defense against Lashley would be the biggest of Crews’ WWE career. A loss would extend the rivalry between Crews and his … crew and the triumvirate of Lashley, MVP and Benjamin. The wild card here is the potential of one of Crews’ quartet flipping to the other side and costing Crews the title on Sunday. 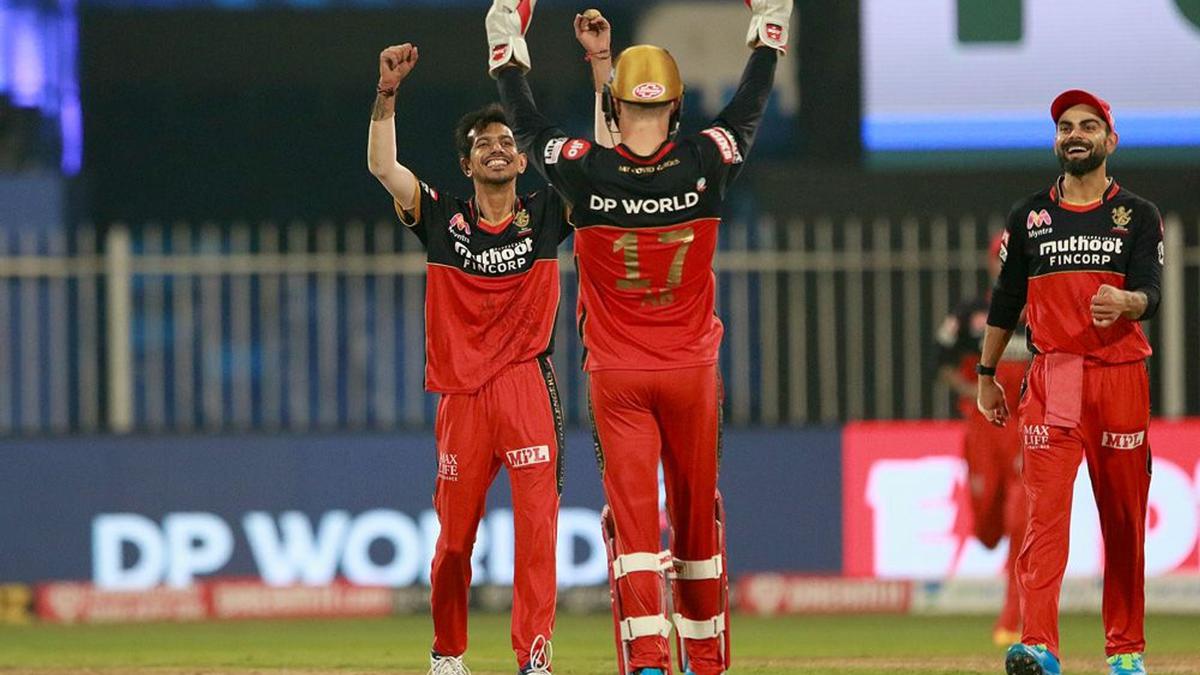 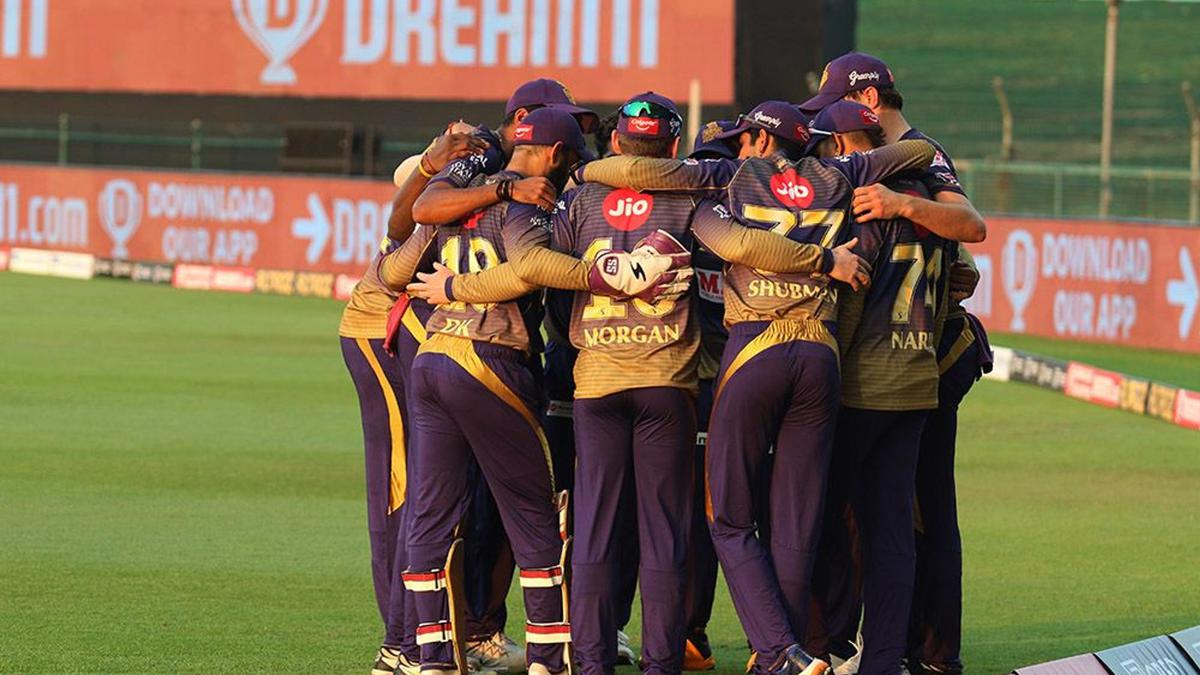