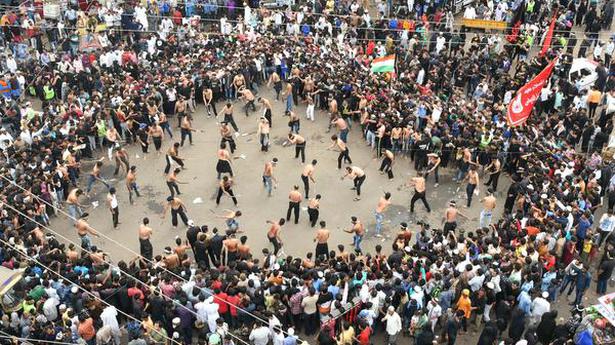 The Bombay High Court on Friday granted permission to hold the Taziya procession on Muharram in Mumbai provided not more than five people take part in it and stringent COVID-19 precautions are followed.

The court said no other such processions would be allowed in the State.

A Division Bench of Justices S.J. Kathawalla and Madhav Jamdar was hearing a petition filed by All India Idaara-E-Tahafuz-E-Hussainiyat, seeking permission to carry out the symbolic procession amid the COVID-19 pandemic. The organisation had sought a direction from the High Court to allow rituals to be performed for two hours every day from August 27 to 30.

According to the court’s order, members of the community will be permitted to carry out the procession on August 30, between 4.30 p.m. and 5.30 p.m. on a pre-determined route only by trucks and not on foot.

A maximum of five people, along with one videographer, will be allowed on the truck and only five will be permitted to walk with the Taziya for the last 100 metres on the selected route, the court said.

The five participants will be required to submit their personal details and addresses to the office of the Commissioner of Police, Mumbai, by 5 p.m., on August 29. The court said the organisation will have to strictly abide by the guidelines issued by the Home Department with respect to the observance of Muharram.

Habib Nasir, the organisation’s general secretary, has given the following undertakings to the court: “There will be only one Taziya, which will be carried from Zainabia (Bhendi Bazar) to Byculla Mazgaon, Shia cemetery. No other Taziya will be carried anywhere in the State. The Taziya will be carried/transported via JJ Hospital, Prince Ali Khan Hospital, Sales Tax Office Circle in a truck i.e. transport vehicle large enough to accommodate it. There will not be any procession.”

“In no case whatsoever, any congregation of people at any point from the beginning till the end of the journey will be allowed. The Taziya will be carried strictly along one route. Not more than five persons will carry the Taziya on a truck, along with one videographer. However, after taking the Taziya down near the graveyard, it will be carried on foot, for a distance of not more than 100 metres.”

The court said, “The State government shall, if not already imposed, impose a restriction over gathering of people at the appropriate places, by issuing appropriate orders, including the point where the Taziya is to start its journey, up to and including the graveyard, where its aforesaid journey will end, by passing appropriate orders under Section 144 (power to issue order in urgent cases of nuisance of apprehended danger) of the Code of Criminal Procedure.”

The court said, “The State shall also provide an escort and also a pilot car for the truck carrying the Taziya and take appropriate measures to keep the traffic away and the road clear along the route.”

Fire in Mumbai restaurant – The Hindu