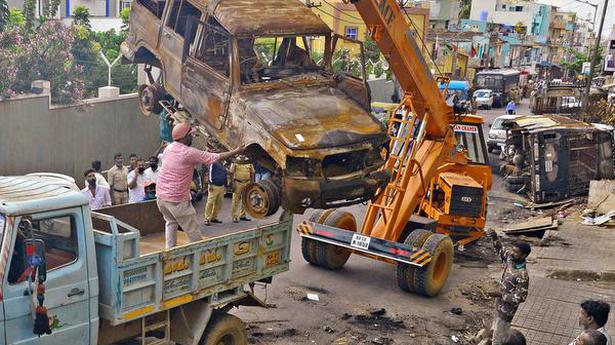 The High Court of Karnataka on Friday appointed H.S. Kempanna, a retired judge of the high court as Claims Commissioner to assess the damages caused to public and private properties during the August 11 violence at D.J. Halli and K.G. Halli localities, and to investigate the liabilities.

The Claims Commissioner, the court said, in view of COVID-19 pandemic, can conduct the proceedings, including recording of statements through videoconferencing facility by following the rules notified by the high court.

The court also directed the government to give wide publicity and to issue public notices, after seeking approval of the Claims Commissioner, asking the people to submit details and documents with regard to the damage caused to their properties.

In all the petitions, one of the pleas made was for appointing a Claims Commissioner as per the Supreme Court’s directions for accessing damages caused to public and private properties and to grant compensation to the victims as per the apex court’s guidelines.

While clarifying that it is not considering the merits of allegations made in the First Information Reports (FIRs) at this stage, the Bench directed the State government to inform whether invoking the provisions of the Unlawful Activities (Prevention) Act was intimated to the Central government as per Section 6 of the National Investigation Agency Act 2008.

Earlier, Advocate-General Prabhuling K. Navadgi told the Bench that provisions of the UAPA Act have been invoked in two FIRs and these cases are transferred to Central Crime Branch for investigation The A-G also said the State government would like to file objection to the PIL petition seeking transfer of the probe to the NIA while asserting that the government is committed to conduct probe in a fair and transparent manner.

One of the petitioners, N.P. Amruthesh, has alleged that Pulakeshinagar MLA Akhanda Srinivasa Murthy, whose house has been damaged in the violence, has been visiting the police station and the office of the Commissioner of Police and such interference by the MLA could not be allowed.

The transfer of probe to an independent agency is essential in this case as a large number of police are victims in the violence, it was argued behalf of another petitioner.